It just so happened that I flew to London on my mum’s 70th birthday. Originally from England, she hasn’t been back since she left in 1966, at 17 years old. Like my brother did at my age, I decided to take the trip down to the town where my mum spent her childhood. I wanted to walk the streets and get a feel for the place, it seemed fitting that if I couldn’t be in New Zealand to celebrate my mum’s 70th, I could at least go and visit the place she grew up.

It was cold and raining when I stepped off the train at Shoreham-by-Sea. Wrapped up in my jacket I made the short walk into the little village, where I was greeted by a handful of little shops. I ducked into a pottery store to shelter from the rain, and actually ended up buying myself a little coffee cup. I’m a bit of a sucker for things that are hand made, locally, and even more of a sucker for anything coffee-related. Most probably know that as I travel carry-on only (around 8kg total), I rarely pick up souvenirs – so the coffee cup is special. I had a chat with a lady in an antique store, and sat in the old church off the main street. I walked through the church yard where my mum used to read library books; she was regularly scolded by the librarian for bringing books back the same day, not believing that she had actually read them. 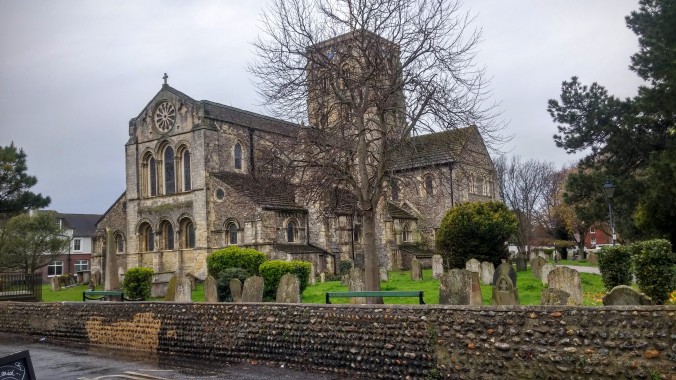 By this point the rain had eased, and the sun was out, so I strolled easily down the main drag toward West Street. It occurred to me how cute many of the houses in this town were, I would guess that there were very few houses younger than 100 years. It occurs to me that modern architecture has failed to build on the beautiful foundations gifted to it by the past. As far as I could tell, number 54 was the oldest building on West Street, with a plaque dating it to 1775. It is considered a historic building, so can be neither demolished nor altered. It looked to be made of beach stones held together by crude cement, and was trimmed with cute wooden frames. I knocked on the door, hoping for a glimpse inside, but I didn’t get an answer.

As I absorbed the house from across the street, my head was filled with stories written within the walls in front of me 60 years prior. This was the first house on the street to have a fridge, and a black and white TV. Where eventually my widowed grandmother would struggle to put one meal on the table each day; where my mum was imprisoned for a year while she fought Tuberculosis. It was a really special moment for me.

Next I hopped on a bus to Hove, a popular holiday town between Shoreham-by-Sea and Brighton. The buildings in Hove and Brighton were just as fantastic. I was reminded very much of the apartment buildings in San Francisco – squeezed together and painted bright colours, just one block from the ocean. I stopped for some fish and chips (well researched prior, as I’m a complete f&c snob) and was pleased. It’s been months and months since I had fish and chips, as they just don’t exist in the US. And it’s one of my favourite foods. The place I went to, Bankers Restaurant, serves sustainably sourced Icelandic cod. I’m not entirely sure how much difference ‘sustainably sourced’ makes, but they’re the only place in the country with that certificate, so I think the effort alone deserves merit. 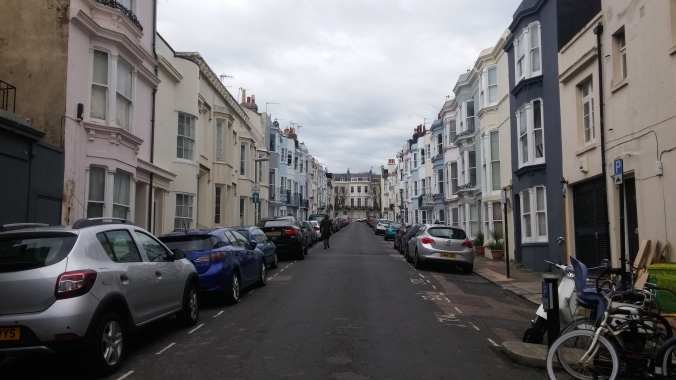 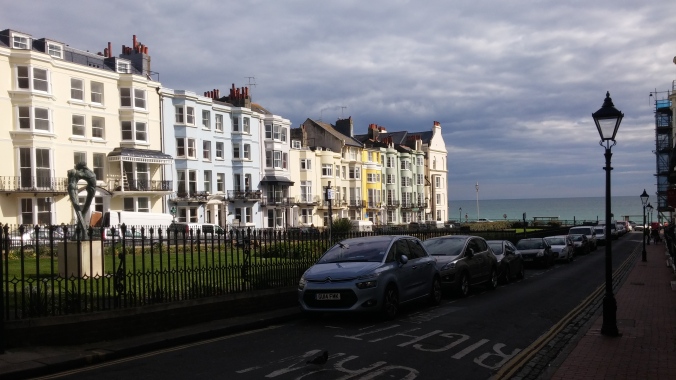 After lunch I continued onto Brighton and explored The Lanes. The Lanes are a set of cute alleyways with boutique shops. I chanced upon a decent coffee shop, which is basically a nightmare to find in England. After coffee I headed to Kemptown and took tea and scones at a specialty tea shop, before hopping on a train back to sunny London. I think that I’ll always think of England as tea and scones.

7 thoughts on “The Motherland: Brighton”

Hiking has been a long time struggle for me as an amputee, and is something that has held me back in the past from outdoor pursuits. I’ve had this new foot and wonderfully fitting socket for a year now and the difference has been incredible. ⠀ With a couple more adaptations I clocked in 14 miles of muddy rocky elevation and some snow this weekend. Psyched to keep pushing and see where it takes me. Higher, I bet.
Mixed climbing. Another climbing variant I didn’t really expect to enjoy. Super delicate, thoughtful, and tenuous. There was ice raining down on the standard start to this route so I took a crack at this alternate start at Hidden Falls and loved it. The video is double speed to give you an idea of how slow I’m climbing this. ⠀ @fearthenbeer was supplying beta through this and I learned the hand in 2nd position switcharoo which blew my mind. It’s fun to be new and have those joyous learning moments. ⠀ I’m getting psyched for TWO more trips this month. 😁 ⠀ @arcteryxportland
%d bloggers like this: