I spent a week in Delhi, much longer than I intended, while waiting to get a visa for Myanmar. Other than the spice market, and the nice Couchsurfer I met up with to eat the best Thali ever, Delhi was a bit lackluster. 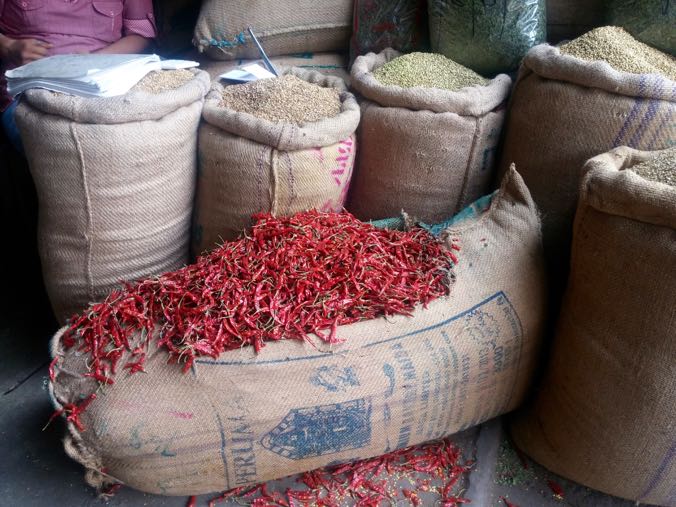 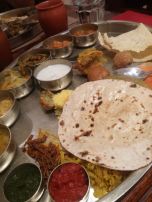 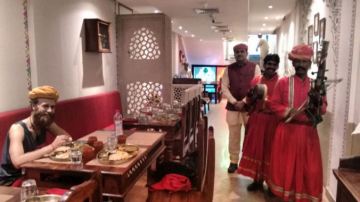 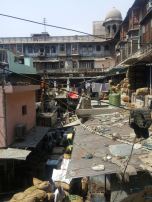 Cramped, hot and dusty in the spice market, Old Delhi.

These bags are 30kg each.

From Delhi, I took an 18 hour train ride to Jaisalmer, a desert town in the corner of Rajasthan, near the Pakistan border. This was my first proper Indian train experience, starting from Old Delhi Station. After waving away the touts trying to sell me fake tickets, I entered the platform. It was a dirty, stinky slab of concrete. There were pipes oozing what really did look like fecal matter onto the railway tracks, and people camped all over the platform. It was a scene that only India can create. I’ve spoken to travellers who have waited on the platform for 22 hours because their train was delayed, so perhaps that’s why there were so many people camped out.

The queue for last minute tickets.

An eye for an eye. Standard day in India.

I shared my 6 person berth with 7 adults and 3 children. The beds are stacked three high, and were surprisingly comfortable. People jump on at some stations and walk through the carriages selling food and chai, sending out a wailing chant as they try to entice potential customers. Overall, I’ve been very impressed by the Indian rail system. Like everything in India, it’s just very congested.

When I awoke the next morning the landscape and changed drastically. I was now in the desert. When people say desert I normally picture sand dunes and blue skies. In reality the desert is more rocky than sandy, with trees and dry shrub sparingly dotted throughout the landscape, much like a scene from Breaking Bad. Once off the train I was greeted by the usual throng of rickshaw drivers wanting my fare. I was drawn to a thin man in jeans and a shirt (even in the 40 degree heat everyone still wears pants and sleeves) by his big warm smile. He turned out to be the owner of a guesthouse and camel safari business, and took me in his jeep to drink some chai and discuss booking a camel safari. We talked for a while and negotiated a rate for the three day safari with another couple that were leaving the following morning. 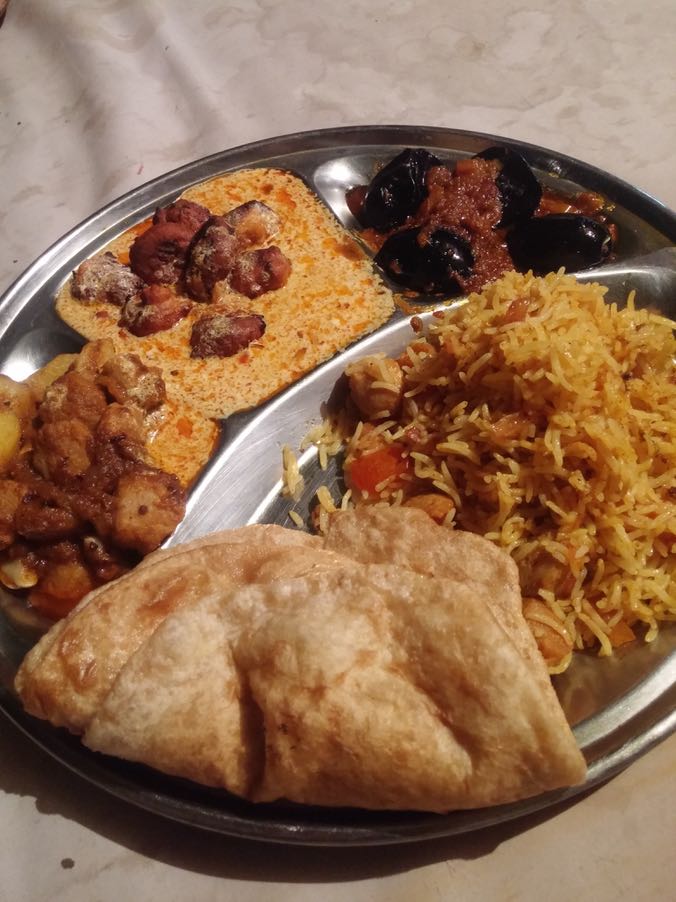 The guesthouse made a killer Thali.

I spent the afternoon exploring Jaisalmer City, most notably the Jaisalmer Fort. The fort is interesting, as it’s one of the only forts that is still inhabited by people. It’s also nearly 900 years old – super cool. I walked around the sandstone walls and through the beautifully handcrafted Haveli-style streets. One of the things that amazed me most about Jaisalmer was that a lot of the new construction still follows the same wonderful architecture as the older parts of the city. Buildings are still being built using sandstone and are finished by skilled craftsmen. I find this endearing; it’s so much nicer to look at than the concrete, steel and glass monstrosities that are being build in the rest of the world. On the walk back to the guesthouse I was invited into a clothing shop to drink chai. The shop owner woke her husband up, and sent him home on his motorbike to make us chai. This sounds over the top, but the Indian people really take hospitality very seriously, and see it as their duty to make sure any guests in their country are well looked after. I felt a little bad, but knew it was useless to protest. It turned out to be the best chai I had in India.

The fort at Jaisalmer.

Back at the guesthouse I checked my place out on trip advisor, and found a lot of negative reviews from people who had been promised a safari with a ‘couple’ and ending up going by themselves. I asked the owner about this and he assured me, far too convincingly, that there was definitely a couple. As I had paid in advance, I accepted my fate of three days in the desert with no one but a guide and a couple of camels. In the morning I headed out to the desert by jeep, alone, and met my guide, Elup. 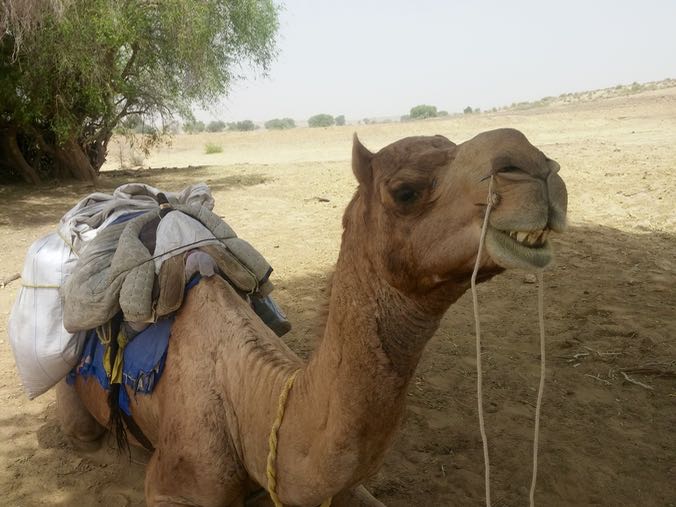 I named my camel Simon.

Elup was a ragged, dirty clothed man from a nearby muslim village. He loaded our supplies (food and water) onto the camels and tied a pink cloth around my head. Locked and loaded, we set off into the hot, rocky abyss. We rode in silence for a couple of hours, before stopping for lunch under the shade of a tree. One thing that I found interesting about the Thar Desert, were how many people seem to live there. Wherever we went we were coming across settlements and small villages. As such, there were a lot of animals around, goats especially. Elup asked me if I wanted chai, and on my affirmative he walked off in the opposite direction toward a herd of goats. As I watched him, amazed, I saw him find and milk a female goat straight into the cooking pot. He returned with a grin on his face and a pot full of steaming, frothy goats milk. “Lucky day! You will be thinking this chai too much amazing!” He exclaimed. We drank the chai while he cooked lunch.

A pack of desert goats. 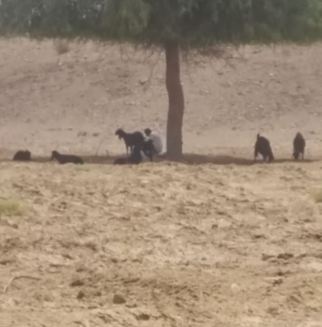 Elup cooked basically the same meal twice per day. Spicy vegetable curry, often with potatoes, and a lot of chapati (roti). I was amazed to see someone cooking such an elaborate meal, and basically making bread while we camped in the desert. It was tasty though, so I wasn’t complaining. There wasn’t a lot of conversation, as we reached the extent of Elup’s English skills pretty quickly. He was quite well versed in trying to convince me to buy him a camel, so we often spoke about that. 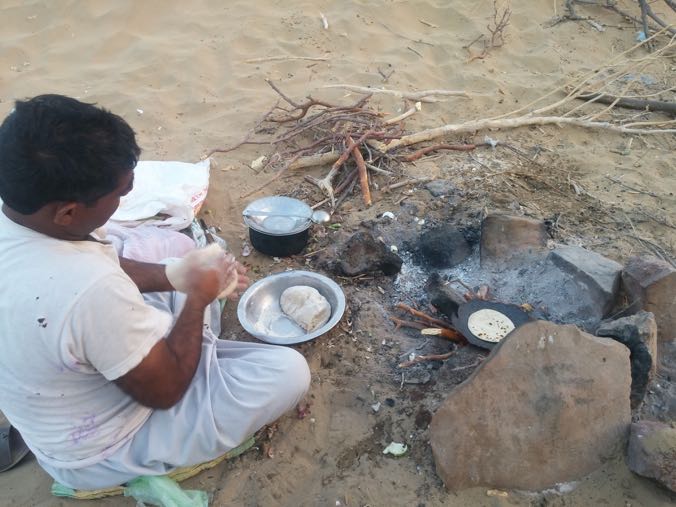 Making chapati over the fire.

It sounds rosy and pleasant. Maybe even fun, right? Well, it was anything but. The days were hot, an unbearable 45 degrees; perhaps even higher, I don’t know for sure. We rode from 8am until midday, stopping for lunch and trying to escape the heat under trees with few leaves. In reality, there is no escaping it. Even when you find some shade, the wind comes through like a fan heater. On day one I got sunburnt through SPF 50 sunscreen, so decided to cover every piece of skin that I could. I wore pants all day, long sleeves, and wrapped a singlet around my face. I now understand why desert dwellers wear so many clothes – it’s actually cooler than when your skin is exposed to the sun. Go figure. 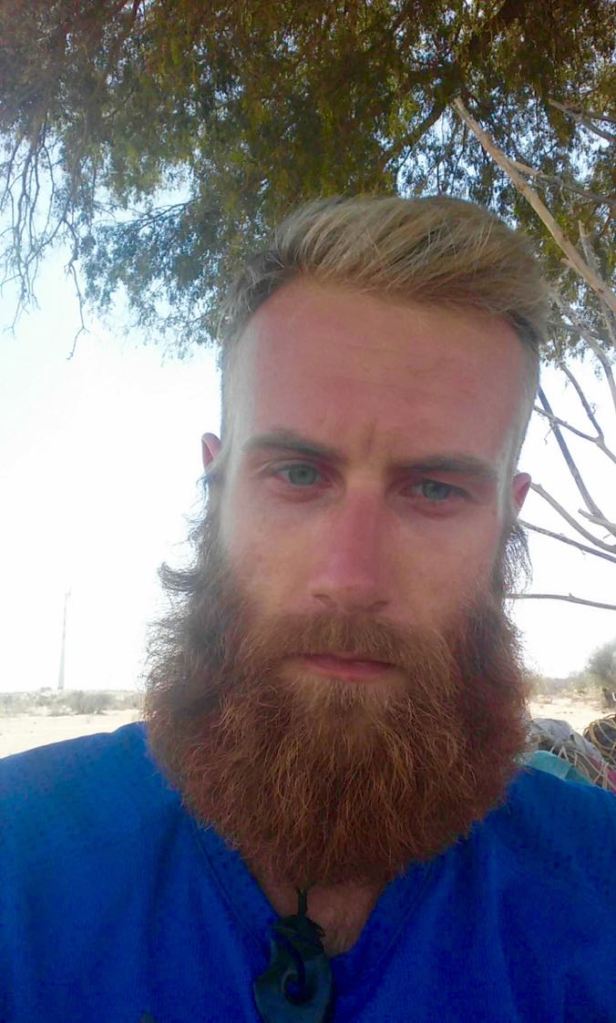 We stopped at villages during the day to feed and water the camels, and slept on sand dunes at night. Once the sun had gone down, the temperature dropped to somewhere around 30+ degrees, which was absolute heaven after the daytime heat. As we rode on camels in the mid mornings, I had tastes of heat exhaustion, becoming drowsy, and very thirsty. In the mornings I had just one litre of water to drink until lunch, because it was a lot of effort to access the larger water tanks strapped to the camels. I can’t imagine what being in the desert without water would be like. I probably drank around 6 litres per day.

We found the dunes! 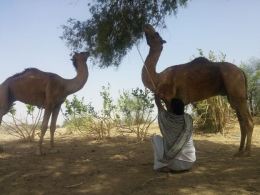 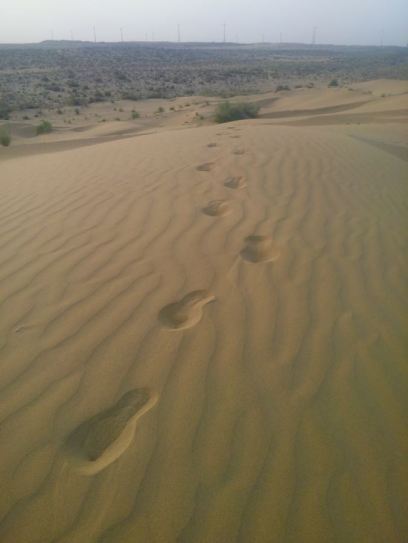 We ventured quite far into the desert, perhaps 20 or 30 kilometres from the Pakistan border. By the end of the third day I emerged, meeting the pickup jeep on a road and cruising back to Jaisalmer. I was beaten, broken and battered. My face and hands were burnt, my clothes stank of salty sweat, and my butt hurt from riding a camel for three days. My spirits were low, I felt like I’d just been through an ordeal – as if I had really been lost in a desert for a week, and had just been rescued. We stopped at a roadside shop and bought a bottle of water. Cold water. After drinking only warm water for days, it tasted like the most wonderful bottle of water I had ever drank. I took a shower, and boarded a bus bound for Udaipur; the tour of Rajasthan continues.

7 thoughts on “Three days in the desert”