On the way from Japan to India, I decided to stop by Hong Kong for a couple of days. I had no expectations for Hong Kong, and I left very impressed. A few days before leaving Japan I managed to organise some couch surfing for 3 nights in Hong Kong. Calvin, my host, kindly gave up his bed in his apartment in Kowloon whilst I was staying. He also took two days off from work to show me around. It soon became clear that I was in for a two-day whirlwind tour of Hong Kong. 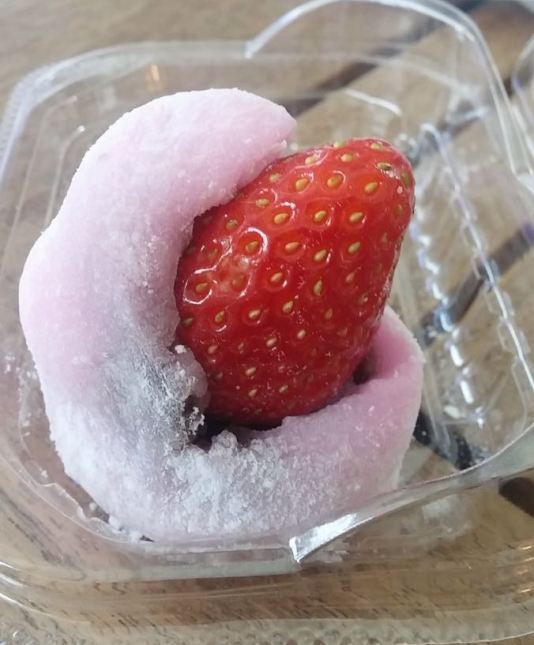 My last mochi in Japan.

Calvin took me to his favourite Buddhist temple, and to his favourite vegetarian restaurant; he walked me through the bird market, the flower market, and around the busy streets of central Hong Kong. We took a bus to Victoria Peak, and did the small walk at the top, taking in some breathtaking views. Calvin asked me why people think a view over a concrete jungle is breathtaking and wonderful, he didn’t find it very impressive. It was an interesting question, and I had to think about it. The best I could come up with was that the more things you can see, the more interesting the view is; Hong Kong especially boasts such a contrast between nature and man. I was really impressed by all the parks in Hong Kong, allowing people to escape the busyness of the bustling city streets. There are birds, ponds, koi, waterfalls, trees and flowers. All just a few minutes from the street, and had many business workers eating lunch, reading, running, relaxing and doing yoga. 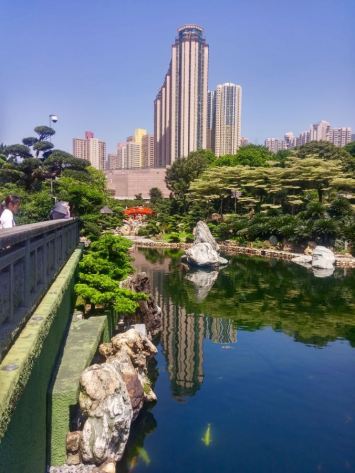 A city of contrasts. 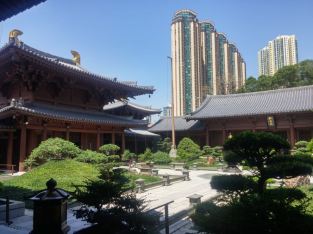 A quiet temple in a bustling city. 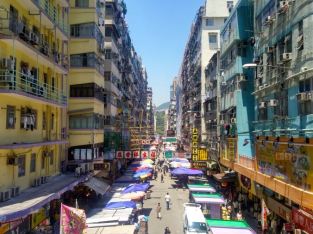 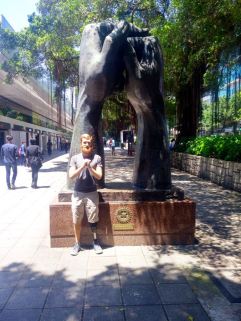 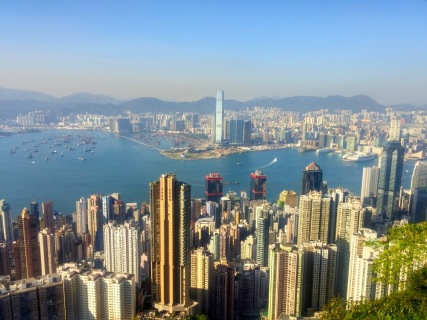 Top of the Peak. 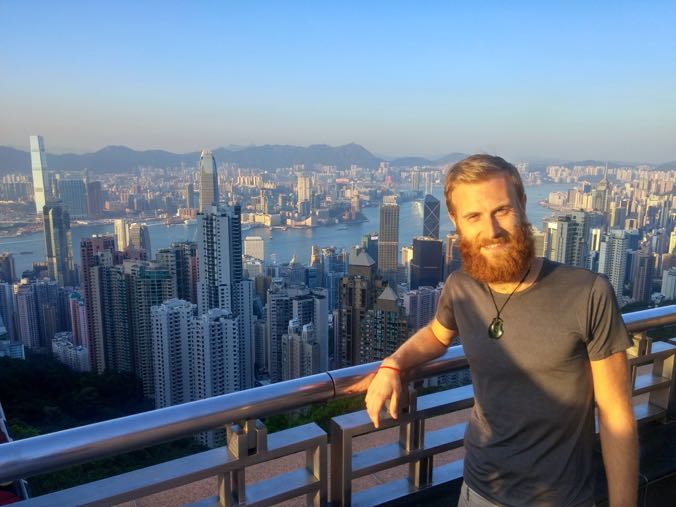 Top of The Peak.

We also went to Lantao Island by cable car, which was a very leisurely way to get there. It’s a 15 minute cable car ride going up the surrounding hills and over to the island. There is a large Buddha at the top, and a fishing village just a short bus ride away. We visited it all, stopping to eat some fishy dried snacks in the village. 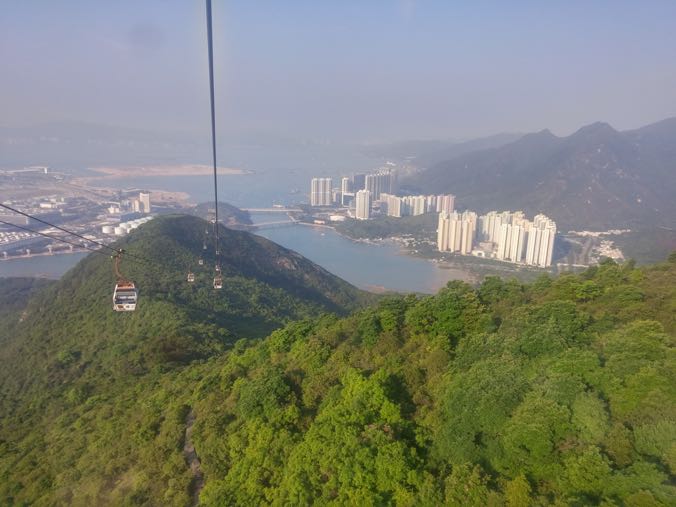 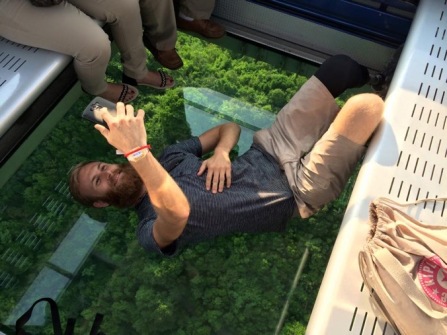 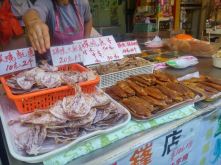 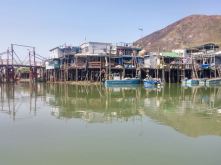 Calvin had read on my couchsurfing profile that I basically live to eat. Up for tasting anything and everything I can get my hands on. As such, he kept my stomach stuffed full the entire time I was there. For dinner we ate at a fusion dim sum restaurant in Mong Kok, which was delicious. Check out the cute pig-shaped custard buns. I registered my interest in eating a local style conjee (Chinese porridge made from rice), and Calvin obliged, taking me to the local wet market for breakfast the next morning. The conjee had raw beef, squid, octopus, and thousand year egg. Calvin commented that foreigners don’t usually brave the egg, which I guess is understandable. 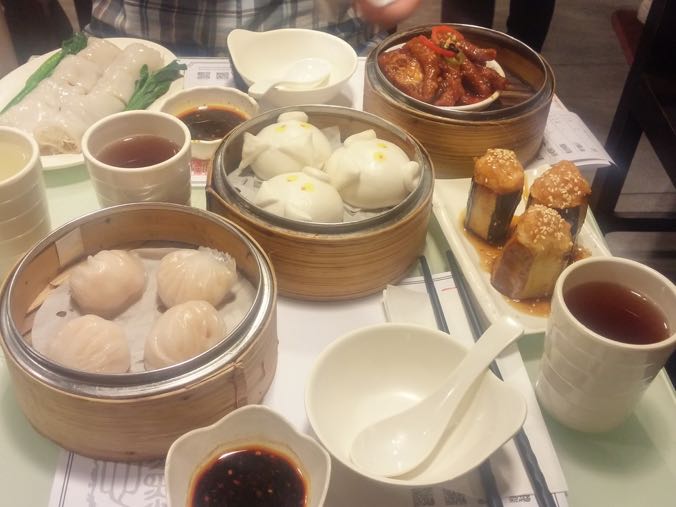 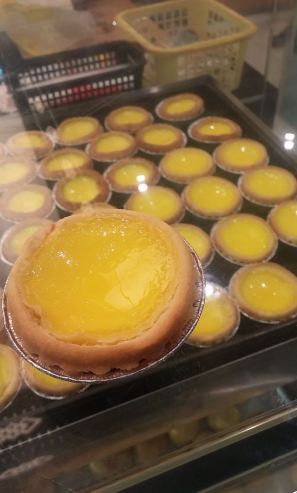 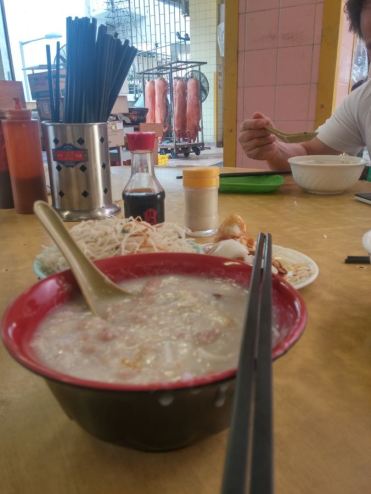 The night before I left I met up with my friend Boo, who I met in Vietnam last year. Since I had taken her street fooding in Hanoi, she wanted to take me street fooding in her local Hong Kong, telling me, “Prepare your stomach, it’s going to be ghetto.” We ate at a super local place in Mong Kok that I never would have found by myself. The dish was called Pot Rice (I’m not sure of the Chinese name), and was rice served with chicken knuckles and Chinese sausage. Each portion is cooked in its own clay pot so that every meal has crunchy rice at the bottom. So delicious. We walked around Mong Kok, letting that settle, before stopping and a street food store serving intestines (I don’t love eating intestines, but these ones were actually really tasty) and stinky tofu. I had been wanting to try stinky tofu for a while, so it was good to tick that one off. It was actually really tasty, and not as stinky as I imagined. I’ll have to try it in China some day to compare. 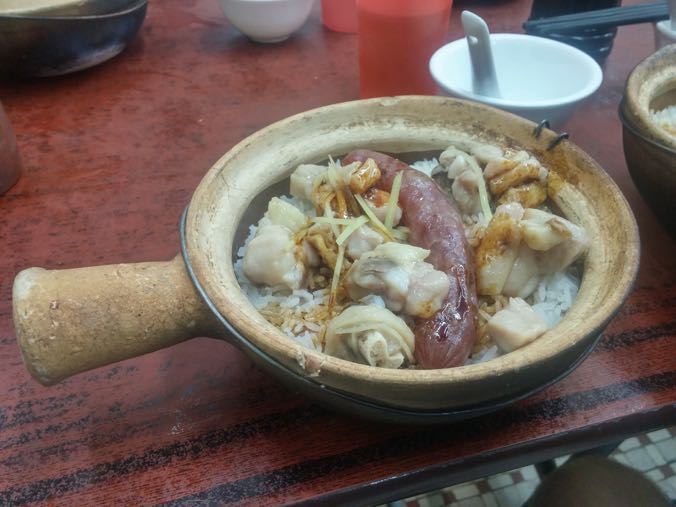 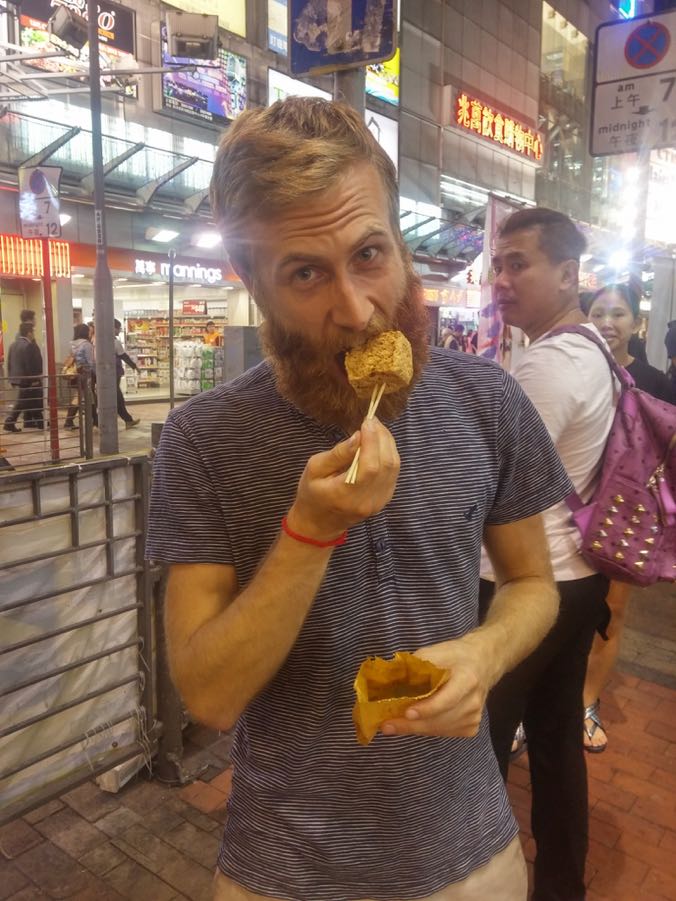 We ate some typical Hong Kong street snacks made from waffle batter, stopped to drink roadside Chinese tea, and went to what I’m assuming was a Taiwanese style desert place. We got shaved ice with red beans and some crazy candy floss dessert. (I’ve been a big fan of shaved ice since Alexa introduced me to it on my first day in Los Angeles, and visiting Japan has created what I’m sure must be a life-long addiction to matcha.) I’ve now been lucky enough to reconnect with two people I met from my last trip. It was really nice to see Boo again and swap travel stories. 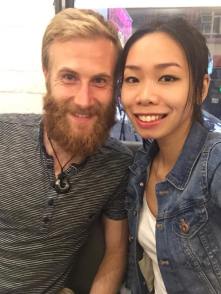 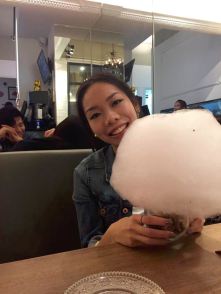 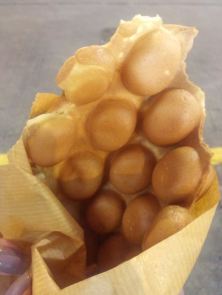 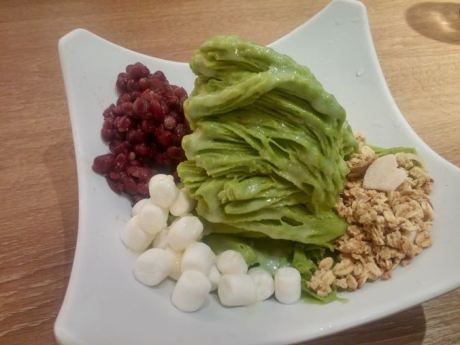 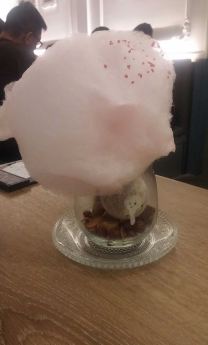 Worth noting is that I did all of this and more in only two days in Hong Kong. Generally my travel style is to spend a good few days in each place, doing a lot of relaxing and soft exploring (walking the streets) at a reasonably leisurely pace. It was fun for me to do so much (thanks, Calvin!), but boy it was tiring. Hong Kong was such an interesting city. It’s a great mixture of modern and old Asia. The restaurants are clean, the public transport is good, people are courteous; then you get some streets that smell terrible, people who spit in the street, and street food stalls.

My next flight was from Hong Kong to Chennai (India), with a 5 hour stop in Singapore. By now I’ve rid myself of so much stuff that I’m able to get my entire luggage weight down to 11kg (by temporarily adding electronics to my pockets), which is close enough to get my bag through as carry-on on most budget airlines. Taking my bag with me to Singapore turned out to be a stroke of luck. At the Singapore transfer counter I was asked to present my Indian visa. “I don’t need one, I’m from New Zealand.” I replied smugly. Incorrect. So it turns out as of February this year, everyone needs an e-tourist visa for India. Oh, shit. And it takes four days to be processed. Oh, double shit. Everyone I’ve met on my travels seems to have missed at least one flight on their trip. I really didn’t think that would be me, but there you go. 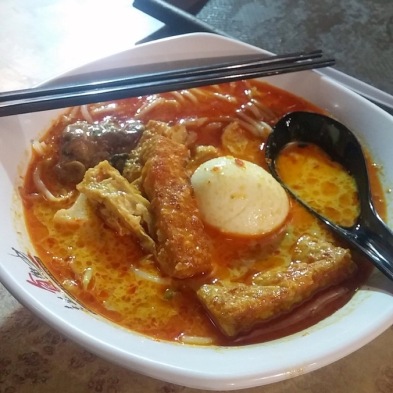 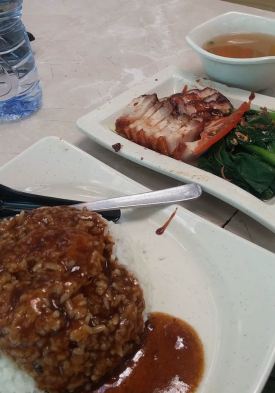 Chowing down in Changi.

Luckily Singapore’s Changi is the most wonderful airport in the world. If you don’t believe me, read this. I found out that I couldn’t actually sleep in the airport, so just hung out for a couple of hours and booked a hostel in town. I figured that Singapore wasn’t the worst place to be stuck for a couple of days. I spent my time eating Laksa and Chicken Rice; food makes me so happy. My Indian visa came through within a day, so I booked a new flight to Chennai, and arranged a couchsurfing host to stay with.

I’m now in India, with a lot more new stories to tell. Here’s a curry to whet your appetite. 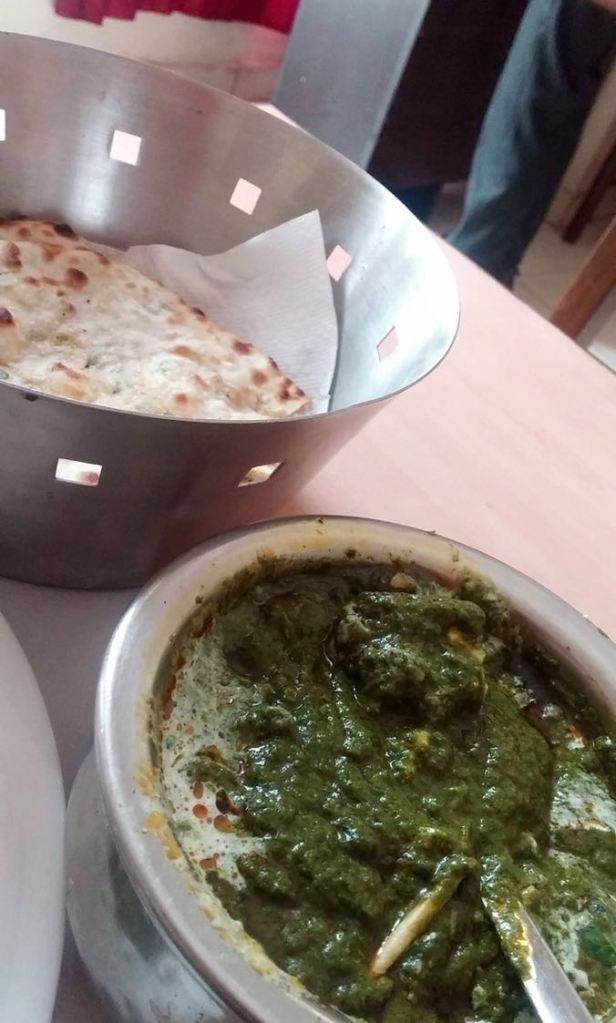