I celebrated my birthday by waking up early and taking a 7am bus from Osaka to Hiroshima. Some might think it sad to spend 6 hours of their birthday on a bus, but I had a great time. Like everything else in japan, the buses are marvelous – comfortable seating and smooth, straight roads. I listened to podcasts, and every hour or so the bus stopped and I hopped out to eat some Takoyaki, it was a pretty relaxing day.

I’d been lucky enough to find hostel availability (it seems to be impossible to book anything around Sakura season), and began asking how to get to Onomichi (the area that my hostel was in). As it turns out, Onomichi is a small city another 90 minutes away by train. Whoops, no wonder they had availability. I only had a couple of nights before I would take my bus back to Osaka, so I mused over going to Onomichi or trying to find a hostel in Hiroshima city. As I walked around I laughed out loud at the realisation that I was homeless in a strange city on my birthday. By luck I ran into someone who actually worked in a hostel. They had a bed for two nights from the following day. I locked it in, and after deciding against trying to find some emergency accommodation (read: Manga Kissa or train station seat), I set off on my train journey to the unknown Onomichi. 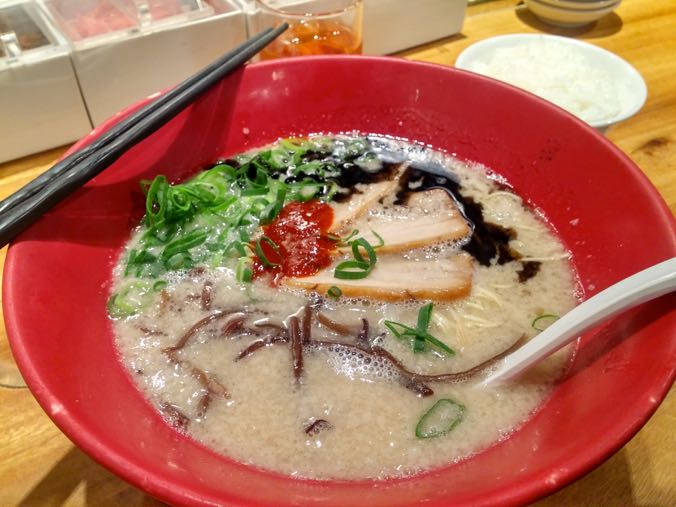 But first, let me eat a Ramen.

On the ride to Onomichi I met a lovely Jichan named Hanasori. He spoke some English and we spent the ride talking about our countries, cultures, and lives. I gave him my email address and he had his daughter help him to send me an email with some places in India that he thought I might like to visit. Something I’ve really noticed after talking to a lot of Japanese people, is how well travelled they are. I’ve met bus drivers, train station attendants, supermarket cashiers, and restaurant workers. One thing they all seem to have in common is having been on a few overseas trips. It makes me really happy to see people in what the Western world would consider ‘lower class’ jobs being able to get out and see the world. Can a get an “equality,” anyone? It makes me feel really good about spending money in Japan, I feel like everybody is benefiting. Is this Moral Capitalism in action? 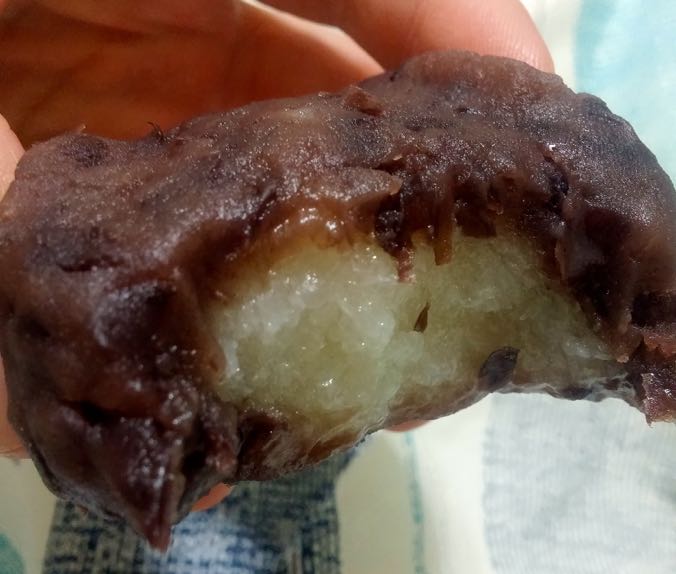 I don’t know what you call this, it’s like a reverse mochi, sort of. Red bean paste is on the outside.

Onomichi turns out to be a cute and sleepy town by the sea. It has a lot of small cafes (with pretty good coffee) and bars. I settled into my hostel and went out to taste the local variety of Ramen. My hostel host described it as “famous.” After trying the famous Ramen shop, and then the famous ice cream shop, and I decided to forgo the famous waffle house. The next morning before heading back to Hiroshima, I climbed to the top of the hill in Onomochi to get a view of the city.

The hill top was beautiful, covered in Sakura with some small temples and street food vendors. The path and steps winding down the hill branches off into tiny alleyways with more cute coffee shops, and lots of wild cats. As I like to do, I stopped into a small coffee house on the way back down. I was alone in the house (it’s basically just a normal house) until an old man came in a few minutes after me. He made me coffee and I flicked through his photo albums and artwork (he’s a hobby photographer and painter). He joined me at the table, and we shared a couple of hours worth of conversation in front of the wonderful view of temples below us. He was an interesting fellow and we discussed many topics. We shared some special sake, and before we parted he gifted me one of his original paintings. I was touched. It felt so strange and token to pay the 500yen coffee bill before I left. The value I’d received in that interaction was far greater than can be written into a bill.

View from the top of Senkoji Park, Onomichi. 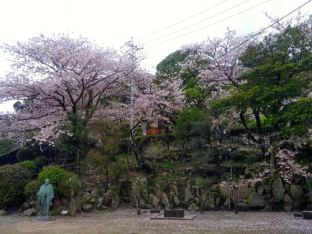 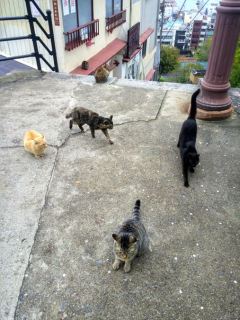 Onomichi has a Cat Street too.

Back in Hiroshima I took in all the sights. I visited the Atomic Bomb Memorial Museum (quite powerful), and walked around the Peace Park, stopping at the numerous monuments scattered around. I ate some Hiroshima style Okonomiyaki (I wasn’t all that impressed, too many noodles), and some wonderfully fresh oysters. Strangely, Hiroshima felt a lot like Washington DC, though I can’t quite put my finger on why. It was an odd feeling to have, given that Washington DC was where the decision to drop the atomic bombs would have been made. The next day I set out with one of my room mates to Miyajima, an island about an hour from Hiroshima. I enjoyed Miyajima a lot. There were wild deer running around and eating tourist maps (okay, maybe just my map), small shops and street food (oyster curry bun, anyone?) and of course the infamous floating Tori. It was so bizarre to see all the deer walking around taking selfies with tourists and grazing up and down the beach in the same way that seagulls do back home. 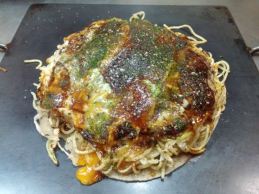 Staring me down while eating my map. 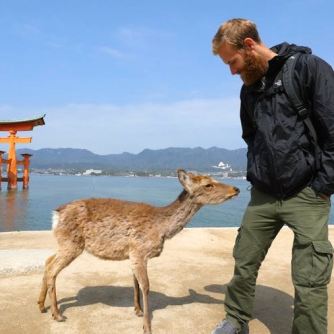 Right now I’m back in Osaka, where I’ve now spent a considerable amount of my time in Japan. I managed to find a cheap apartment on Airbnb and felt compelled to use it as a base. I also had to get my passport renewed as it was expiring. It’s a little tricky to do from overseas because the moment you apply to renew your passport, your current one is cancelled and you cannot travel until you receive the new one. I picked Japan to do this because I figured it was a pretty awesome country to be stuck in. I was right, and I’m sad to be leaving. Japan has had a much larger impact on me than I expected, and the food – oh my god – the food.

My next week or so is looking quite busy; tomorrow I’m catching a flight to Hong Kong, where I have Couchsurfing organized for a three nights. Then on April 17th I’m flying to Chennai, India. I’m very excited to see what India has to offer, I think I’m going to be eating a lot of food (with hopefully minimal time spent on the toilet) and experiencing a very culturally rich country.

8 thoughts on “Homeless in Hiroshima”