From the moment I landed in Haneda airport, I was stunned by how amazing Japan seemed. I arrived after the last train into the city, and hadn’t booked anywhere to stay, so I decided to sleep at the airport. I had my first bowl of Soba (even Japanese airport food is spectacular), and walked around looking for a suitable spot. I found a few Japanese salarymen sleeping on some hardwood benches, so I took up a bench for myself. I’m not used to sleeping on solid wood – or in an open airport – and I didn’t sleep all that well, but I did save a lot of money on the after hours bus to town and the last minute hotel I would have had to pay for. As I woke at 6am to strangers walking around me, leg off and sprawled out on the bench, I thought to myself that I must be a real backpacker now. 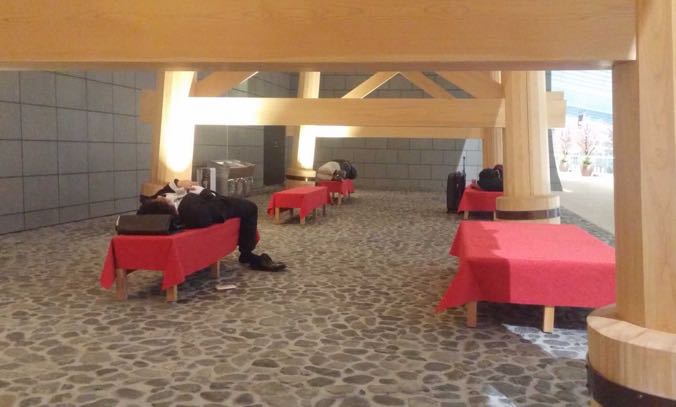 In the morning I took the train into the city, heading toward Kaminoge station where Alexa and I had booked an apartment on Airbnb. I took the wrong subway line and ended up who knows where, but I made it to Kaminoge in the end. Walking to the apartment I was stunned by how quiet the streets were, I was almost in the centre of Tokyo, the most densely populated city in the world, yet my footsteps on the road were the only sounds I could hear. A woman stopped and said to me, “Enjoy your trip!” And carried on. 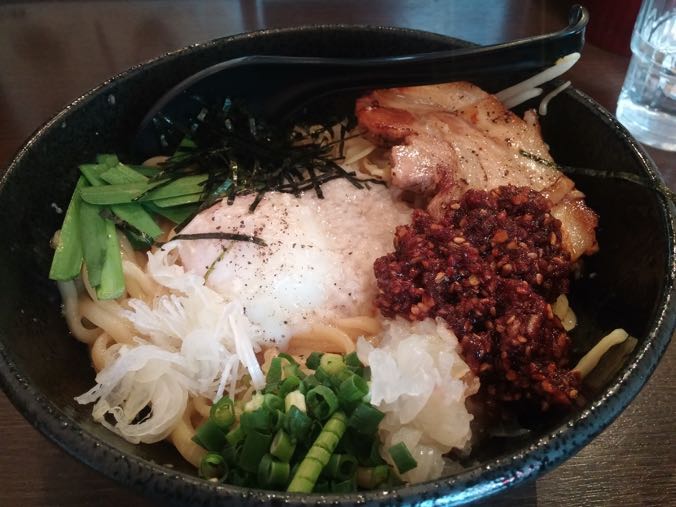 And the food, it stacks up.

Once reunited with Alexa, we explored Tokyo together. Alexa’s knowledge of Japan, Japanese, and her ability to read Hiragana and Katana were most useful. She taught me the in’s and out’s of the culture. Basically: don’t talk on the subway, don’t sit anywhere in public, don’t eat and walk, carry your trash with you at all times (because there are no rubbish bins). I’m finding a lot of the cultural rules to be quite… different. But I’m getting used to them. All in all the Japanese are such a polite people, who keep to themselves. But they’re also very friendly. The difference having just come from Cambodia feels stark. I was used to being hassled in the street every 20 meters, haggling over prices and being stared at all day. I was used to intense heat, bad smells, and a constant fear of food poisoning. Here, none of these worries exist. More and more I’m realising how much I appreciate the comforts of Western culture. (Or do I mean first world countries?)

We met up with Alexa’s friend Debbi, and decided to explore the electric town of Akihabara. Akihabara boasts large department stores full with electronics, massive 6 floor gaming shops, manga shops, and arcades. It also seems to have a very large selection of multi-story sex and porn stores. Unlike back home, a lot is advertised in the windows and spilling out into the street. We had a look in some stores and quite honestly, the Japanese are into some pretty weird stuff. Especially when you venture into the ‘men only’ sections. I explored some of the 6 floor SEGA arcades, and found a pretty interesting gaming culture. Arcade gaming no longer exists in New Zealand, but it has evolved a lot in Japan (probably in all of Asia, I suppose). Gaming is multiplayer now, and there are TV screens on the walls screening the games that are going on. People stand around watching in awe as the best players battle it out. I’m not even talking Street fighter and Tekken tournaments here, these games look similar to Starcraft, and are played with combination of buttons, touch screen, and a stylus type pen. They’re intense. 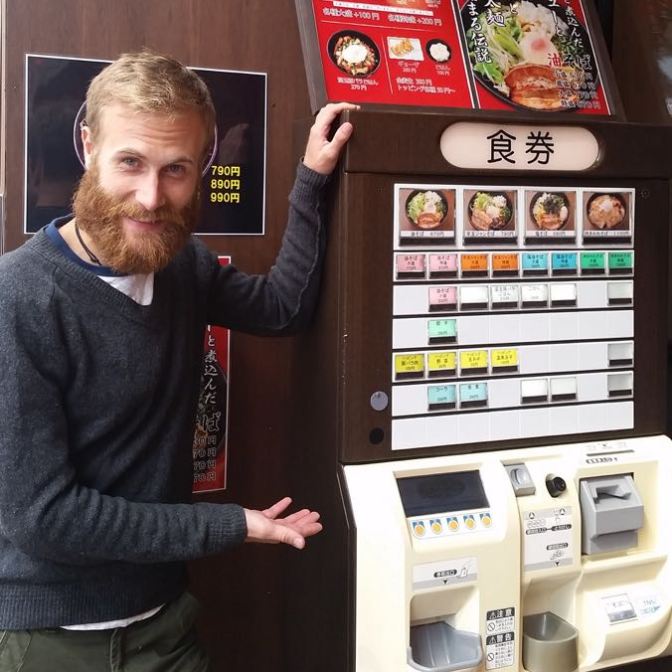 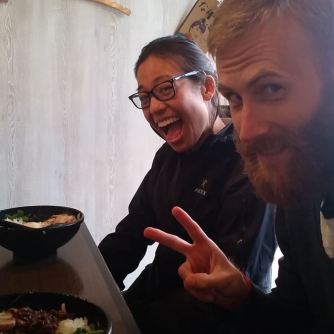 Debbi’s favourite place in the world is Wellington, and she has a super cool blog of her own.

Learning the art of Japanese slurp. 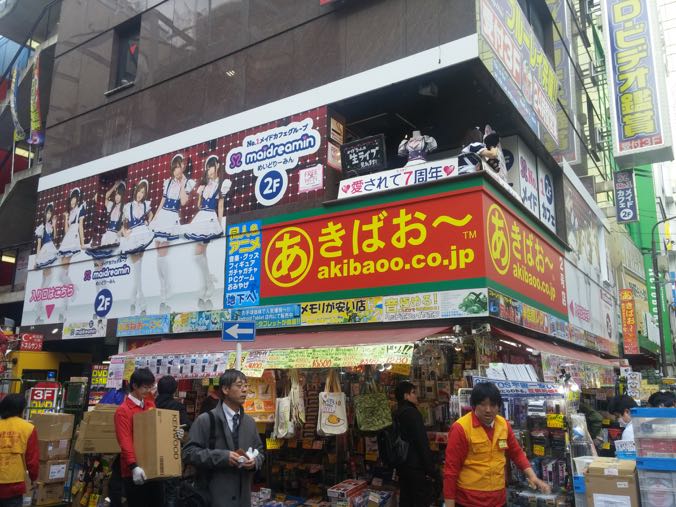 We also visited a maid cafe. No photos allowed.

An underground robot store in Akihabara.

Shibuya was really cool. It’s a bustling district, lit with lights and many, many shops. It felt a lot more like what I expected Times Square in New York to be like. Hundreds (or thousands?) of restaurants, shops and bars. Many of the restaurants are on the 5th or 6th floor and are only advertised in the windows above, so if you don’t look up, you will miss a lot. Alexa and I ate at a cool sushi place, where you use a touch screen to order, and then your sushi comes flying around to you on a train track. Sushi tastes so excellent in Japan. 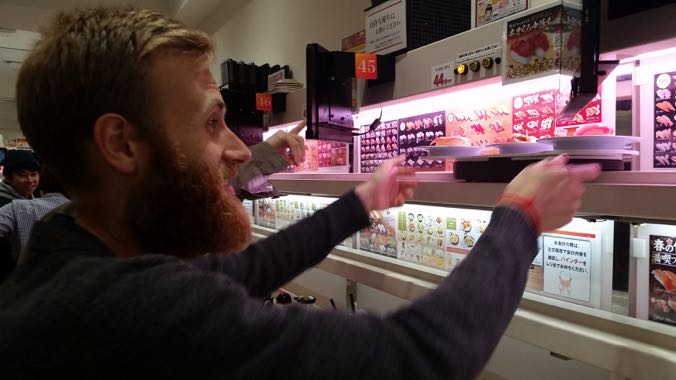 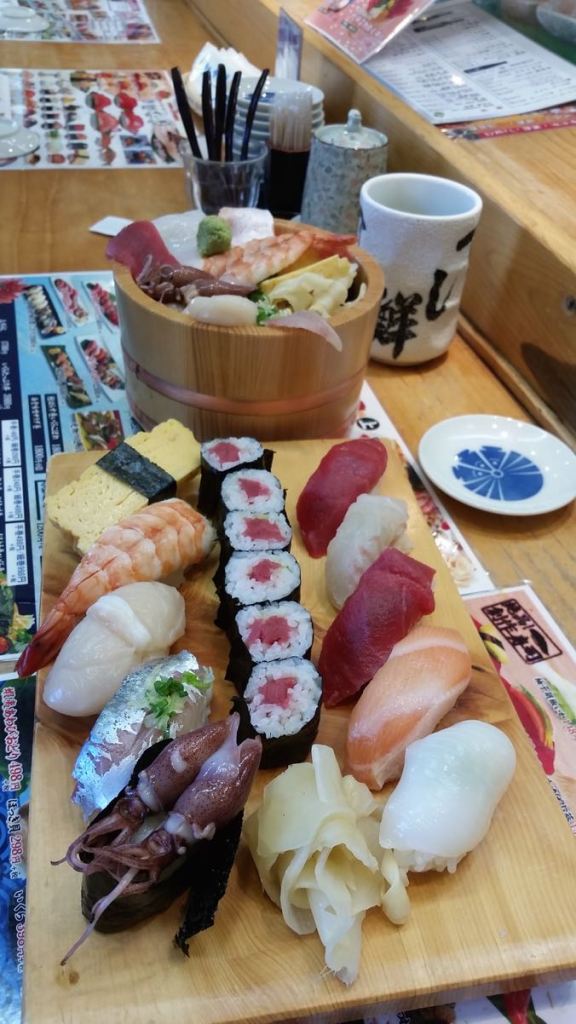 Sushi and Sashimi bowl from Tsukiji, the freshest I’ll probably ever have.

Shibuya is also the home of Love Hotel Hill. For the uninitiated, a Love Hotel is a hotel where you book rooms by the hour, you pick your room using a vending machine in the lobby. According to the internet there are some pretty crazy themed Love Hotels, but we weren’t able to find any. We had fun browsing the streets lined with them all the same. 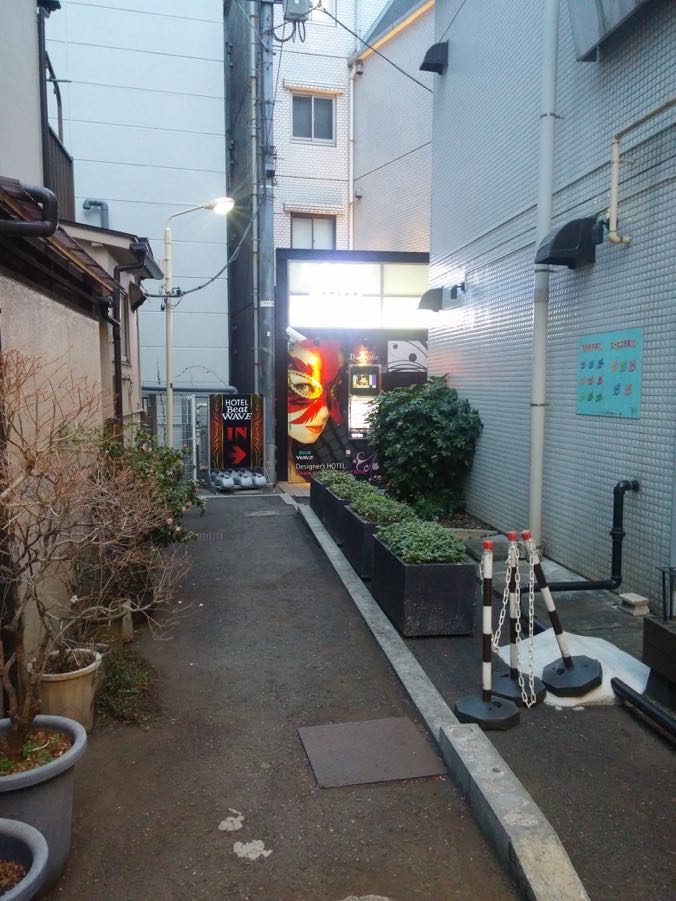 There is also a vibrant coffee seen in Tokyo. Western style. We found a few cool places playing American pop music, with youthful Japanese hipsters sipping Lattes. A couple of highlights were: Streamers, super cool themed coffee, and great atmosphere; Mojo, this one is obvious, I was able to get a taste of Wellington. Both Alexa and I can confirm that the coffee in Mojo Tokyo is just as good as Mojo Wellington. The baristas were so excited to hear that I was from Wellington, and were telling me about how they were trained in Wellington and had worked in all of the Wellington cafes. Instant celebrity status + free iced pour over. Excellent. And yes, that donut below was amazing. 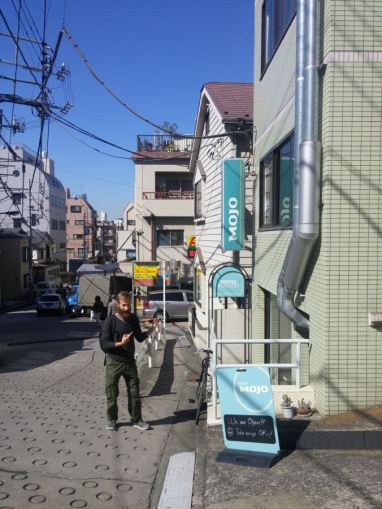 Down a quiet suburban street. 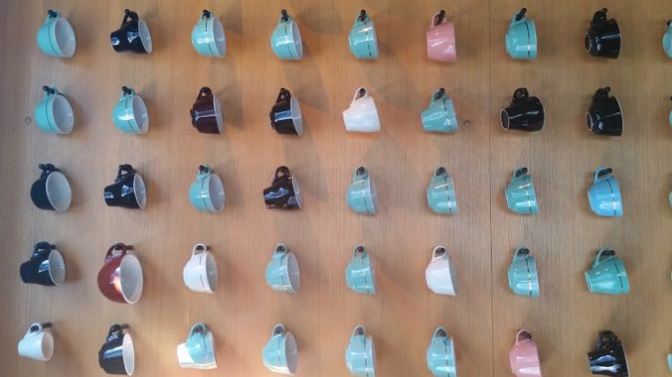 All of a sudden the week had flown by and it was time for Alexa to leave. Sadly, and against my will, I dropped her at the train station before heading back into the world to find somewhere to sleep. She’s going to join me again in June, for a whole month in Malaysia. 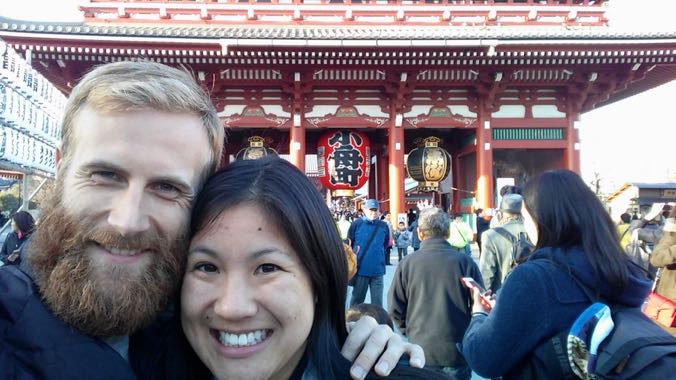 Unlike Southeast Asia, where you can just turn up in a city and find a hostel, that doesn’t seem to be so easy in Japan. I found myself back in Akihabara, walking around looking for a Manga Kissa (Manga/Internet cafe) at 10pm. I’d read on the internet that Manga Kissa are where Japanese people sleep when they miss the train home. Seeings I had read it on the internet, I figured nothing could go wrong, so I set off in search of one. Alexa had pointed out the Hiragana for ma-n-ga so I had a rough idea what I was looking for. Once I started looking I actually found a whole bunch of them. I paid for a cubicle for 9 hours, and all in all it was a pleasant enough experience. I’m looking ahead for the rest of my Japan trip (2 weeks) and there is basically no hostel availability, so the Manga Kissa will be a nice backup for me when I find myself with no where to sleep. Last night I slept in a temple in the mountainous town of Takayama, but that’s a story for another day. Stay tuned. 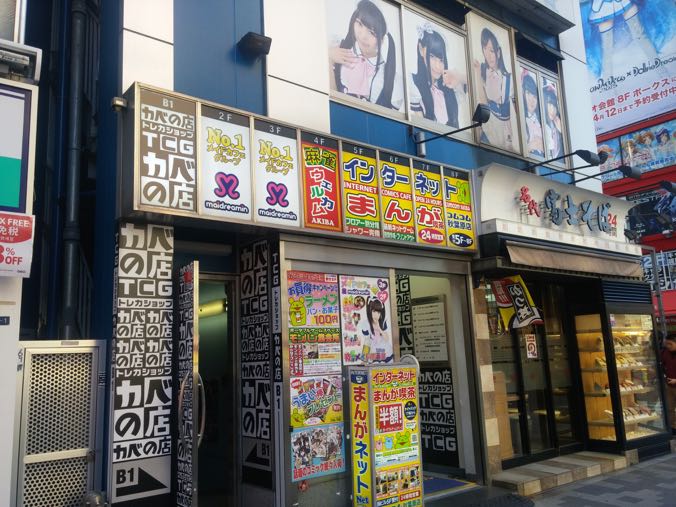 3F is a Manga Kissa

About 20 cubicles to a room. It smells like feet

This photo captured an obscure moment of glum on very fun-filled day. It was bucketing rain in Portland yesterday and I was thinking about how nice it would be to sit on a rock and watch the sun set. ⠀ ⠀ 📸: @mo.in.mountains
I had such a blast visiting friends over in Colorado this weekend. Filled my heart with more ice climbing, got caught in a blizzard, and climbed a classic route in Eldo in the sun. It blows my mind that you could do all these things in the same place, and even on the same day. ⠀ I am so grateful to have so many friends who have opened me up to the world of climbing. The friends I continue make in this community are so encouraging, nurturing, and supportive. I am looking forward to a year of growth. ⠀ ⠀ @mo.in.mountains @fearthenbeer 🙏🏼
%d bloggers like this: