I haven’t done all that much since I last posted, but what I have done has been really enjoyable. After I left Chiro Village I spent a couple of days recouping and eating Western food in Phnom Penh before heading out to see some more of Cambodia. My intended plan was to head south to Kampot for a few days, and then go west to Battambang and back to Phnom Penh. Almost as soon as I landed in Kampot, those plans began to unravel. 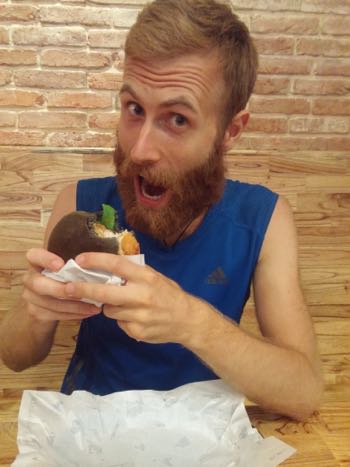 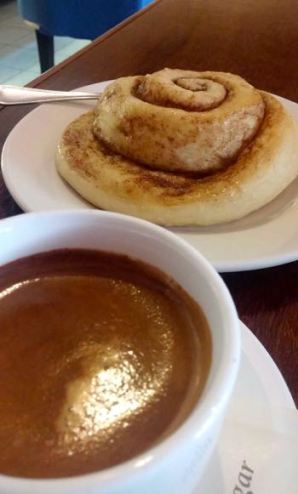 Kampot is a sleepy riverside town only 3-4 hours south of Phnom Penh, and on entry I was struck by one of the coolest roundabouts that I’ve seen. I negotiated a fair price to a hostel with a friendly tuk-tuk driver and settled into my hostel. I left the hostel as the sun was beginning to set, and walked alongside the river into town. Though the riverside town is cute and comfortable, it’s certainly a backpacker hangout, not a local thing. I’m usually adverse to this, but this place had a quaint charm to it. I walked past a movie theatre slash dumpling shop, a restaurant ‘voted best ribs – Phnom Penh Post’, and a lot of cool looking bars and cafes. 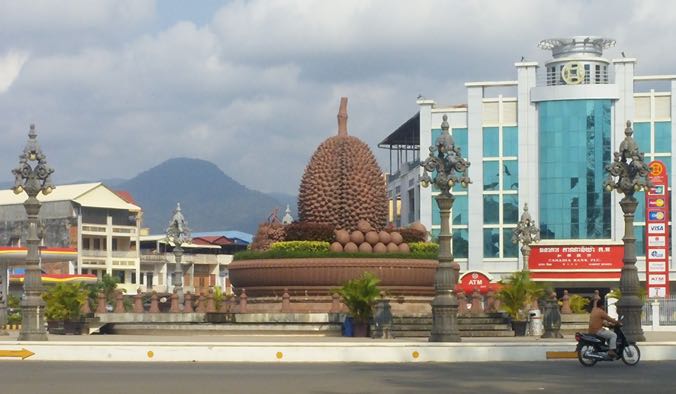 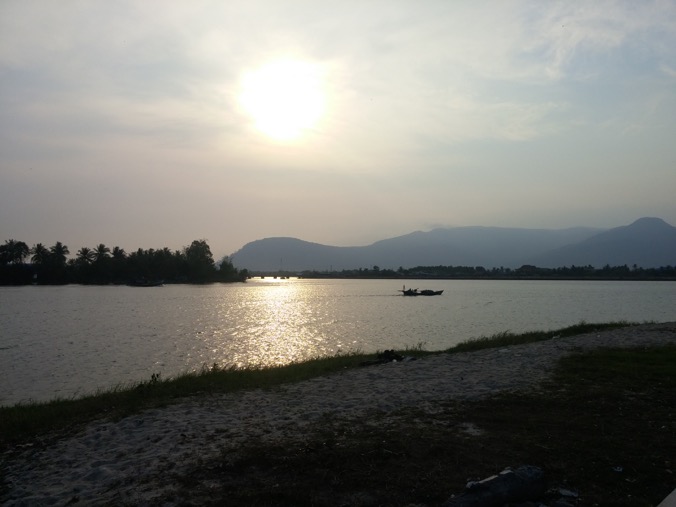 I met up with a friend I’d made in Chiang Mai, and joined him and some others for a moto ride up Bokor Mountain, which turned out to be super cool. It was a cool one hour ride to the top of the mountain, and scattered along the way were various buildings left abandoned by the French colonialists, who had a town at the top of the mountain. We stopped to explore the abandoned structures, which consisted of houses, a church, and a 75% complete casino. Yes, that’s right; an abandoned casino at the top of a mountain. Super cool. What wasn’t so cool was the gigantic casino, hotel, city complex that the Chinese are constructing at the top of the mountain. Based on the number of people up there, and the deserted car park, I would guess it’s running at about 2% capacity. Unfortunately it was very cloudy that day, so I didn’t get to view what I imagine is a breathtaking view. 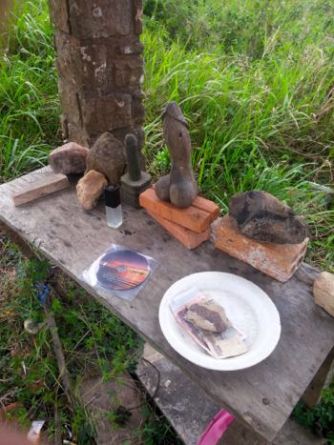 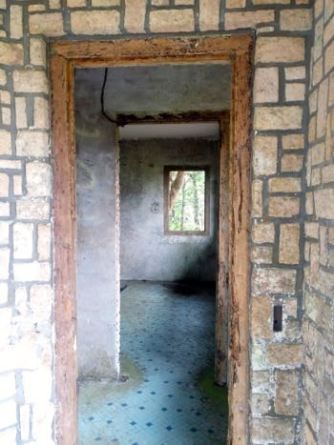 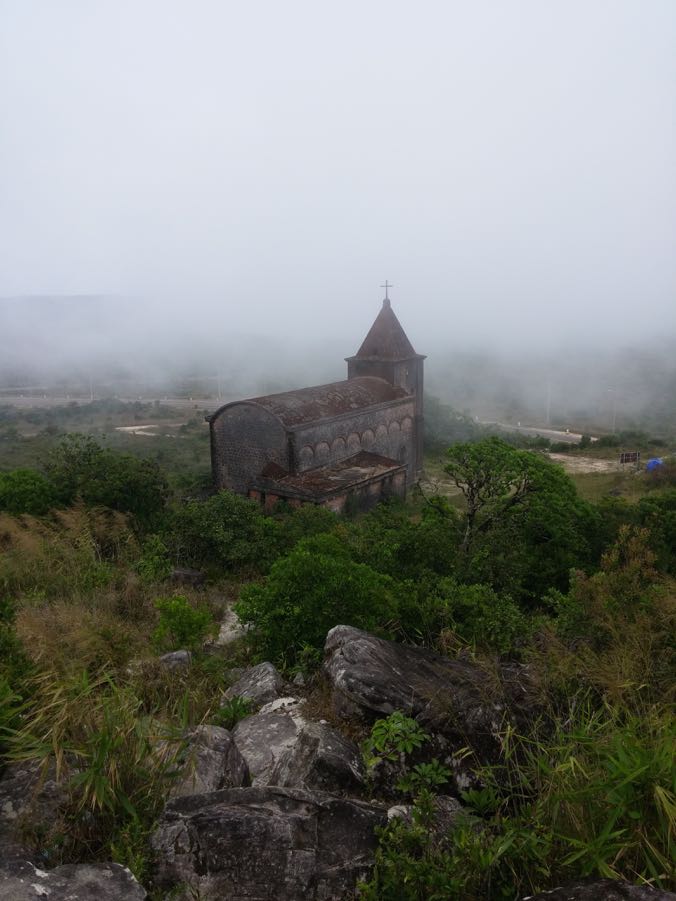 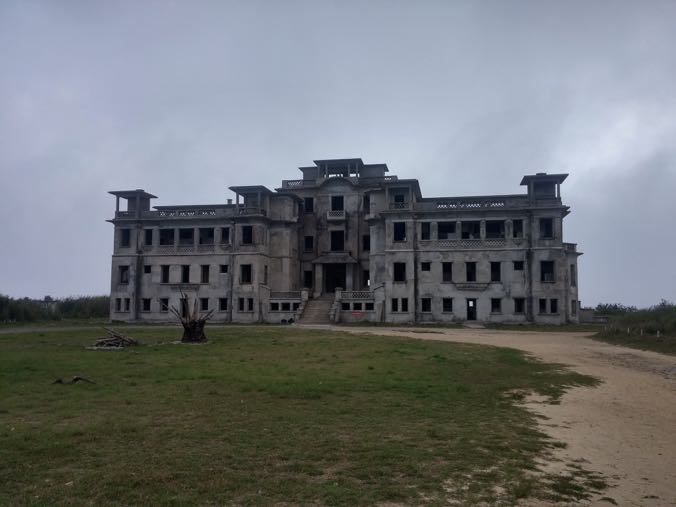 There is also a waterfall up the mountain, which at this time of the year is dry. I’ve never seen such a big waterfall completely dry, and found it humbling, at the top of a mountain, to sit on rocks where waters normally flow forcefully. I felt small and insignificant sitting next to mother nature and world. 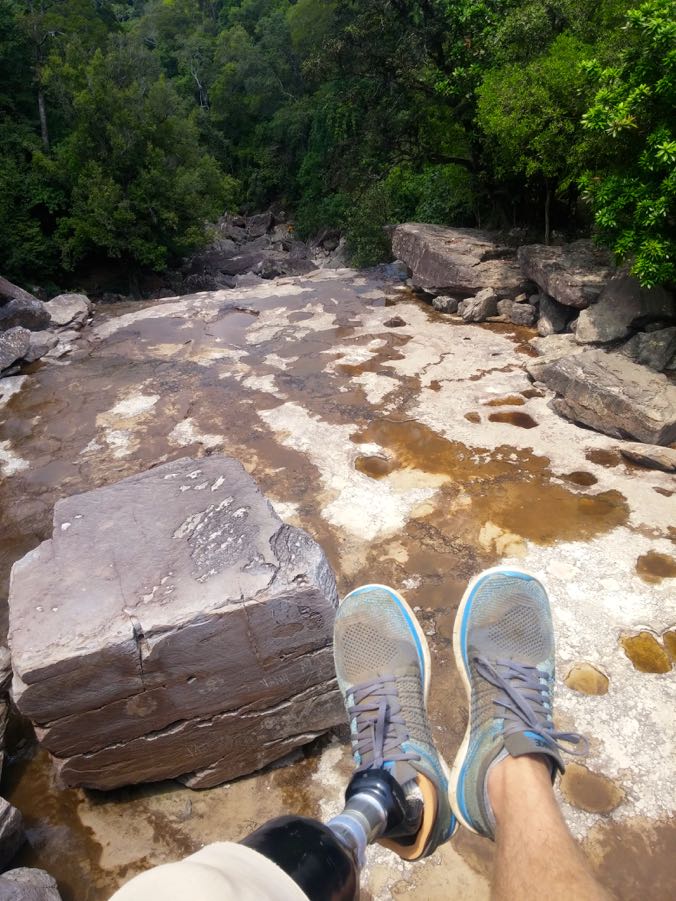 At this point I was loving Kampot, and planned to stay for several more days and explore other exciting areas of the region. But then I was told of a small island in the south with only 3 guesthouses, one which will let you rent a hammock. The island is quiet and deserted, and you can have your own private beach. This sounded too good to be true, so 20 minutes later I found myself in a van headed to Sihanoukville, to see for myself. Sihanoukville has a reputation for being a party town, so I skipped it completely, grabbing a tuk-tuk to Otres Beach. Otres Beach was nice, if a little seedy. The beach is lined with guesthouses, ranging from nice bungalows to crappy guesthouses, to restaurants. All open out to the golden beach, with a constant perfect breeze blowing in off the water. I managed to find a private room for $6 (so cheap for this area), albeit a major crap hole. My room was on the second level of a rickety bamboo structure, loosely connected by a pathway of planks of wood. The whole second level shook whenever anybody walked around, I did wonder if a strong wind could bring it down. 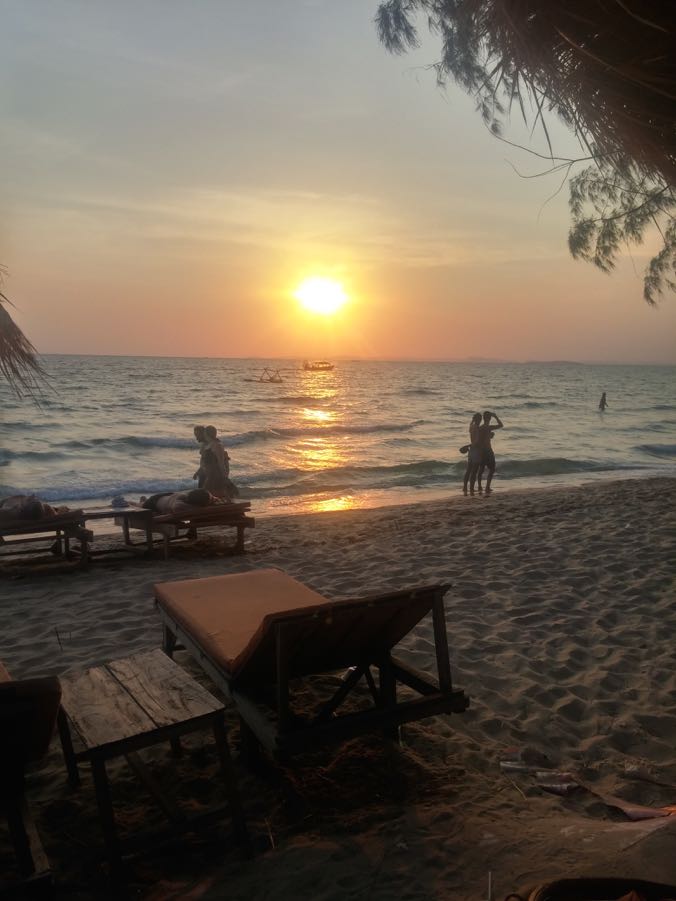 The next morning I found the right spot on the beach to catch the boat to Koh Ta Kiev. There’s no dock, so I waded out to the boat with my bag, climbing on board for the 40 minute ride to the island. Once I arrived, I grabbed a hammock and set out along the beach to find myself a secluded spot. I walked up and down the beach until I found a nice spot right on the beach with two overhanging tree branches to tie up my hammock. I set up, went for a swim, and then kicked back in afternoon sun. Pure magic. This is essentially how I spent the next 5 days on the island, walking back to the bar to eat food (I didn’t have to catch and cook my own food). There were probably about 15 people staying while I was there, I met some nice people and we ate some great food. One night we took a boat ride out to watch the sunset, and swim in the dark with bioluminescent plankton, which was a pretty surreal experience. No photos, unfortunately. 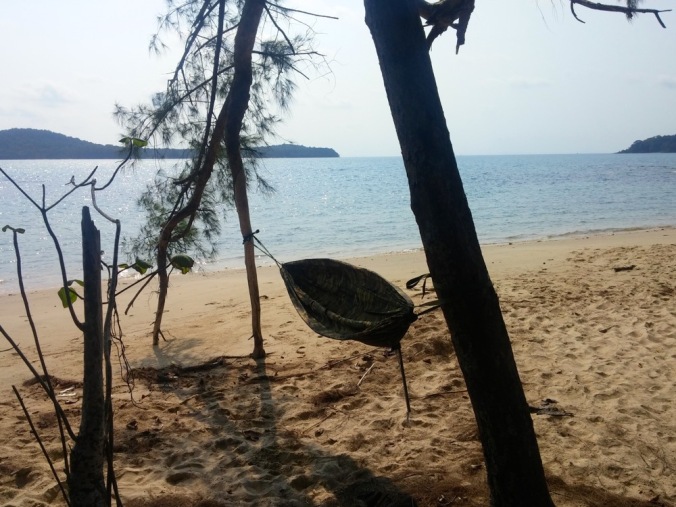 My home for the last week, Koh Ta Kiev 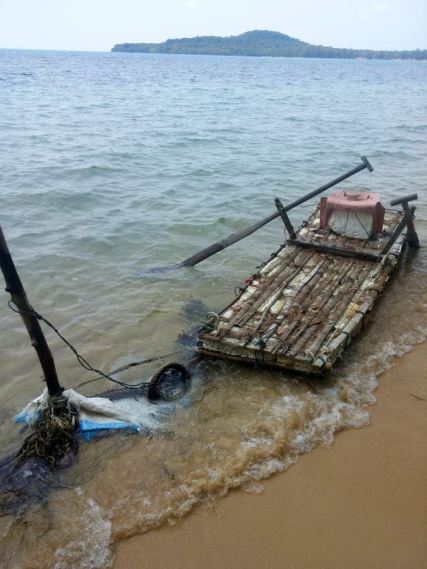 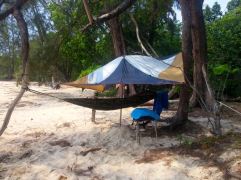 My setup for rain. Yes, I built that table 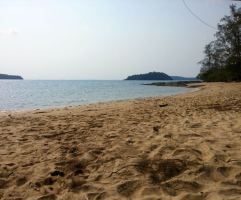 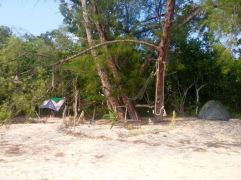 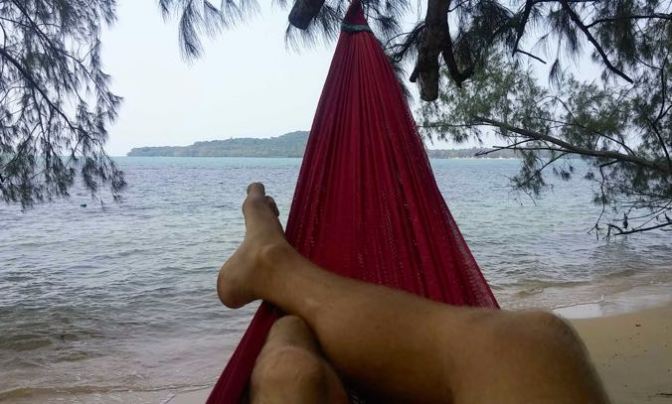 Now I’m back in Phnom Penh for the last time, waiting to catch my flight to Tokyo tomorrow. I managed to forget to renew my Cambodian Visa, and am going to have to pay $110 in overstay fees when I leave the country, whoops. Cambodia has been great, once again. It was nice to spend so much time here, I no longer feel like I have unfinished business. All in all, the people here are beautiful, kind, and welcoming. If you took Cambodia’s people and gave them Vietnam’s food, I’d be very sad to leave. A lightbulb that I had at some point during my time in Cambodia was realising what my reasons for travelling are: 50% food, 30% culture, 20% sights. Since that realisation, I’ve enjoyed my travel far more, opting to do things that make me tick, rather than whatever everybody else (or tripadvisor) thinks is good. 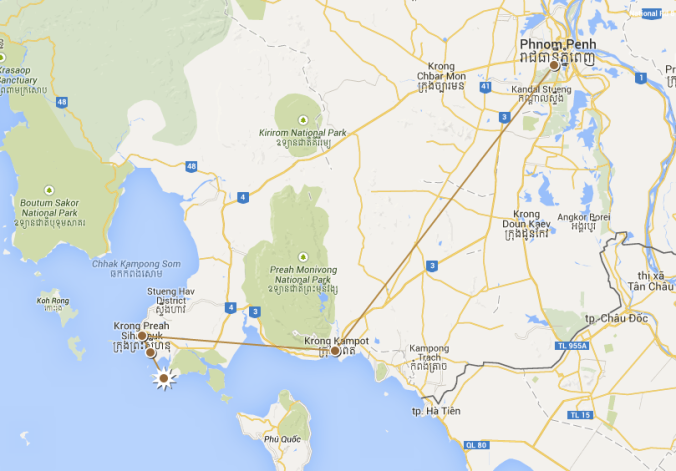